The University is supporting a range of events throughout the month

LGBT (lesbian, gay, bisexual and transgender) History Month takes place across the UK and around the world every February. It celebrates the lives and achievements (and promotes awareness) of the LGBT Community.

As part of the celebrations of LGBT History Month, the University of Portsmouth, together with the Portsmouth Film Society, LGBTQ Staff Network and LGBTQ+ Student Society, is proud to be supporting a range of events throughout the month of February. If you would like to show your support for LGBT equality why not wear a Rainbow lanyard? Lanyards will be on sale at the Students’ Union Shop through the month of February.

Join us for the launch of the LGBT History Month 2020 celebration at the University of Portsmouth, which will feature a range of events including a festival of films on LGBT themes which kicks off with the screening of The Shiny Shrimps (2019). All guests are welcome to see the film for free. 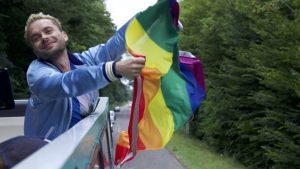 Matthias, an Olympic champion at the end of his career, makes a homophobic statement on TV. His punishment is to coach the Shiny Shrimps, a flamboyant and amateur gay water polo team. They have only one thing in mind, to qualify for the Gay Games in Croatia where the hottest international LGBT athletes compete.

In response to a wave of discriminatory anti-LGBTQ laws in Southern states and the divisive 2016 election, the San Francisco Gay Men’s Chorus embarks on a tour of the American Deep South.

Christmas 1985, Adrian is home for the first time in three years. Between his mother’s fawning affections, his father’s begrudging, stilted conversation and his younger brother’s cold shoulder, Adrian is all too aware of the impact his absence has had on them.

A gripping drama that captures both the beauty and stifling social values of Tbilisi. Set within the repressive limits of an anti-LGBTQ+ society, this is a love story that marries ideas of cultural identity, sexuality and self-expression with beauty and grace.

Fighting with Pride: LGBTQ in the Armed Forces

The book Fighting with Pride marks the 20th anniversary of the lifting of the British Armed Forces ‘gay ban’ on 12 January 2020. It brings together a selection of stories from LGBTQ service men and women who have served in the Armed Forces since the Second World War. Their profoundly moving testaments demonstrate their loyalty, their courage on the battlefield, and their unswerving sense of right and wrong even in the face of personal costs. Join us for this lecture by the editor, Craig Jones, and Elaine Chambers whose life was impacted by the ban.

Parking: Milldam car park on Burnaby Road (PO1 3RE) is available after 5.00pm

Admission is free, but please book a place on Eventbrite.

Rainbow laces is a fantastic campaign supported by Stonewall that encourages sports teams to welcome the LGBTQ community. Professional sports teams all partake in the rainbow laces campaign and that is no different here at Portsmouth. At the University of Portsmouth, we will be giving all our student sports teams the laces to wear in support of LGBTQ throughout February and at Varsity. Sport is a fantastic way to socialise, meet new friends and be physically fit, so we hope by showing our support for the community we can encourage more people to take part in sport and get all the benefits that come with it. Our Students Union clubs love the campaign and each year more are wanting to take part so watch out online for #rainbowlaces to see all the great work our clubs are doing.

Hosted by UPSU and open to all students and staff, come along to the Students Union (Third Space) for an evening showcasing a variety of local support groups, performance and fabulous entertainment hosted by a well known local Drag Queen.

The University also supports an LGBTQ Staff Network, open to all staff to join. The network exists to offer all LGBTQ members of staff and allies the opportunity to:

Staff can join the Google community.

View all of our upcoming events

Read more news about our community

Discover how we get involved locally and how you can participate too, from providing housing for our students to helping with our research projects.