The mysteries of the brain’s reward and motivation centres might hold new clues for Alzheimer’s research and eventually the treatment of some of the variety of symptoms patients experience, thanks to the research of a University of Portsmouth PhD student.

His work focusses a class of proteins called potassium ion channels in an area of the brain that is poorly explored in Alzheimer’s, the striatum.

This part of the brain is important in determining how motivated we are to do certain things based on the expected reward.

Diseases that affect this brain region can result in patients appearing apathetic, which generally leads to a worse health outcome.

Babajide has discovered that Alzheimer’s pathology alters the expression of a variety of different potassium ion channels in this brain region. The implication is that this changes the function in this brain region, which could impact on reward-related behaviour, or the level of apathy.

His work was recognised as an advance to the field because most scientific research focuses on understanding and treating memory impairment, which is the core symptom of the condition.

His study might eventually help scientists better understand the additional burdens of apathy and agitation so often seen in people with Alzheimer’s and even help in the development of targeted drugs.

Babajide is a qualified pharmacist now studying for a PhD in neuroscience.

He said: I am very grateful for the support of my supervisor, Dr Jerome Swinny, in ensuring that my research went in the right direction. I appreciate the University of Portsmouth and Guarantors of Brain charity for supporting me with grants to attend this conference. Receiving the Best Poster Presentation award is like a trophy earned for all the hardwork I put into the research. I feel more encouraged to put in greater effort into finding breakthroughs in dementia research."

His supervisor, Dr Jerome Swinny, in the University’s School of Pharmacy and Biomedical Sciences, said: “The striatum is a relatively under-explored region of the brain in terms of Alzheimer’s. We know that many people living with Alzheimer’s show levels of apathy, but we don’t fully understand why this is so. Hopefully, this new line of research in my lab will contribute to a greater understanding of this important area for dementia research.”

Babajide was given support to attend the conference by the University’s Faculty and Science and Health and the charity Guarantors of Brain.

Do your PhD with us

We're improving our understanding of how the body functions, how disease effects these functions, and the genetic and molecular drivers for illness. Explore our pharmacy pharmacology and biomedical sciences research. 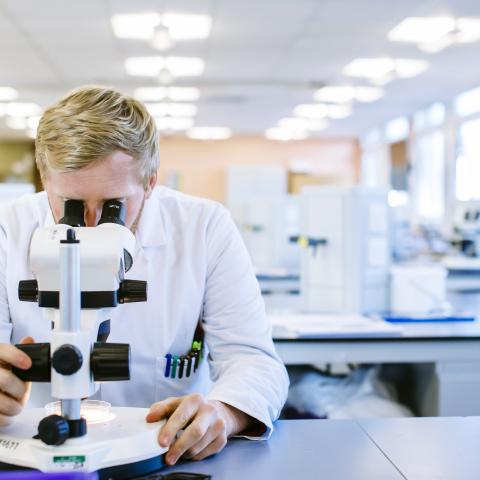