The University's research on plastic-eating enzymes has been shortlisted for this year’s Times Higher Education (THE) Awards in November.

Known as ‘the Oscars of higher education’, the annual awards recognise excellence in academia. This year a project led by Professor John McGeehan has been shortlisted in the category Research Project of the Year: STEM.

John, along with his PhD student, Harry Austin, and colleagues in Oxford, USA and Brazil, engineered an enzyme that can start breaking down some of the world’s most commonly polluting single-use plastics within days.

The University has recently launched the Centre for Enzyme Innovation which was awarded £5.8 million from Research England to push this research forward, grow our international team, and potentially revolutionise the recycling process.

This work is at the centre of a wider strategy to transform the University of Portsmouth into one of the world’s greenest universities, placing sustainable development at the heart of our curriculum and student experience, and building a world leading academic community focused on plastic and sustainability.

The University’s media team worked with the researchers to raise awareness of the plastic eating enzyme when the study was published.

There was significant global media coverage, including BBC News at 10 and BBC Breakfast, The Times (front page), The Guardian (shared nearly 70,000 times), The Economist, Sky News, and USA Today.

The study was also ranked in the Altmetric Top 100, which highlights research that has generated significant international scientific and media attention. The article is in the top 5 per cent of all research outputs ever tracked by Altmetric.

Professor McGeehan has also been invited to speak at over 25 international conferences such as the prestigious EMTech in Hong Kong and Singapore.

The media team works with hundreds of University academics and thousands of journalists, filmmakers and television producers a year, and also offer on-campus media training and meet the editor workshops with editors from The Conversation, a platform which revolutionises the way researchers can reach wider audiences worldwide.

How the enzyme works

Meet the mutant enzyme that could combat plastic pollution 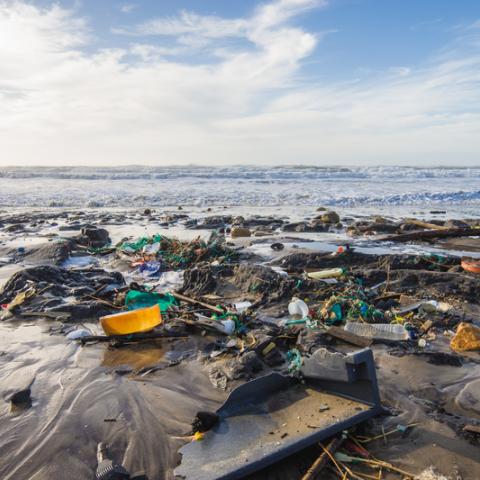